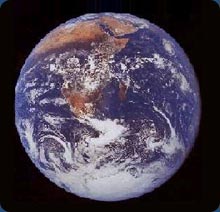 Earth is the third planet from the sun, in between Venus and Mars. It is a mid-sized planet, larger than Pluto, Mercury, Venus and Mars, and smaller than Jupiter, Saturn, Uranus, and Neptune. Earth has one moon, which is approximately one-fourth the size of the planet itself. The composition of the planet is unique—a solid iron core in the center creates a magnetic field, surrounded by the mantle, a thick layer of molten rock. On top of the mantle is a thin layer which includes the oceans and continents. Earth is not fully round, as it is flatter at the poles and bulges at the equator. The orbit of the planet, however, is almost a perfect circle. The smallest distance between Earth and the Sun is a little more than 91 million miles, and the farthest distance is slightly under 94 million miles. From space, water and clouds cause the planet to appear blue with white swirls